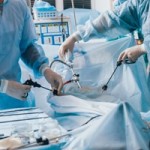 Laparoscopy, also known as key-hole surgery, refers to operation through small skin incisions using special instruments. Currently many complicated urologic procedures can be performed with laparoscopy. It has the advantages of providing magnified vision of the operative field, less post operative pain and faster recovery compared to traditional open surgery.

Laparoscopic nephrectomy
Laparoscopic kidney surgery can be performed both for cancer or non-cancerous diseases of the kidney. In most cases, the whole of the kidney has to be removed but in selected cases, it is also possible to remove just the tumour part and preserve the rest of the kidney.

Laparoscopic adrenalectomy
The adrenal gland is situated above the kidney and secrets various types of hormone responsible for control of blood pressure, blood sodium, potassium and sugar. Laparoscopic surgery for adrenal tumour has now been accepted as the new standard of treatment.